Tuning the availability for drivetrains of cement mills

Fig. 1: A look into the gearbox of a cement mill
Condition monitoring provides more scope for decision-making during repairs

Drivetrains on cement mills generally have to be available around the clock for 340 days a
year. In addition to the quality of the drive itself, maintenance has a major influence in meeting
this expectation. Of course, every operator would like rolling bearings and gearboxes to work
without problems for years until they have reached their projected service life. However, many
influencing factors mean that some drive elements cannot reach this point in time, even with
optimal care.

In order to meet the specific availability expectations, it should be known what happens to the
drivetrain and which components will have used up their wear and tear at what time. But the
level of wear and tear does not decrease linearly. The annual view through the inspection hole
is usually not enough, especially since rolling bearings are not visible at all. Therefore, tools
are required that provide current, reliable status information at least every few days.
Vibration diagnosis has become the method of choice in the past 60 years. Vibrations contain
a lot of information, especially about mechanical phenomena. Vibrations also spread very well
and are easy to measure and interpret.
If, for example, the raceway of a rolling bearing has an error, each rolling element that passes
this point generates an impact. The frequency, i.e. how often the impacts are generated per
second, results from the internal rolling bearing data and the speed. Defects on gearwheels
are similar. Specific vibrations are generated that can be precisely assigned to a mechanical
cause based on the frequency. Thus, based on a few rules, the vibration signal can be used
to draw clear conclusions about the damage condition of a drive.
The measurement is usually carried out with piezoelectric acceleration sensors. These are
sufficiently precise and cover a very large measuring range. They are also robust, easy to
install and inexpensive.

The vibrations are made visible in the spectrum and in the envelope spectrum. And because
modern drives are often operated at variable speeds, the order spectrum and the envelope
curve spectrum are used instead. All of these spectra are formed in modern systems with high
resolution, so that vibrations can be measured very finely, that is, down to a few millihertz. This
accuracy is necessary, on the one hand, to reliably analyze defects and, at the same time, to
reliably avoid misinterpretations. 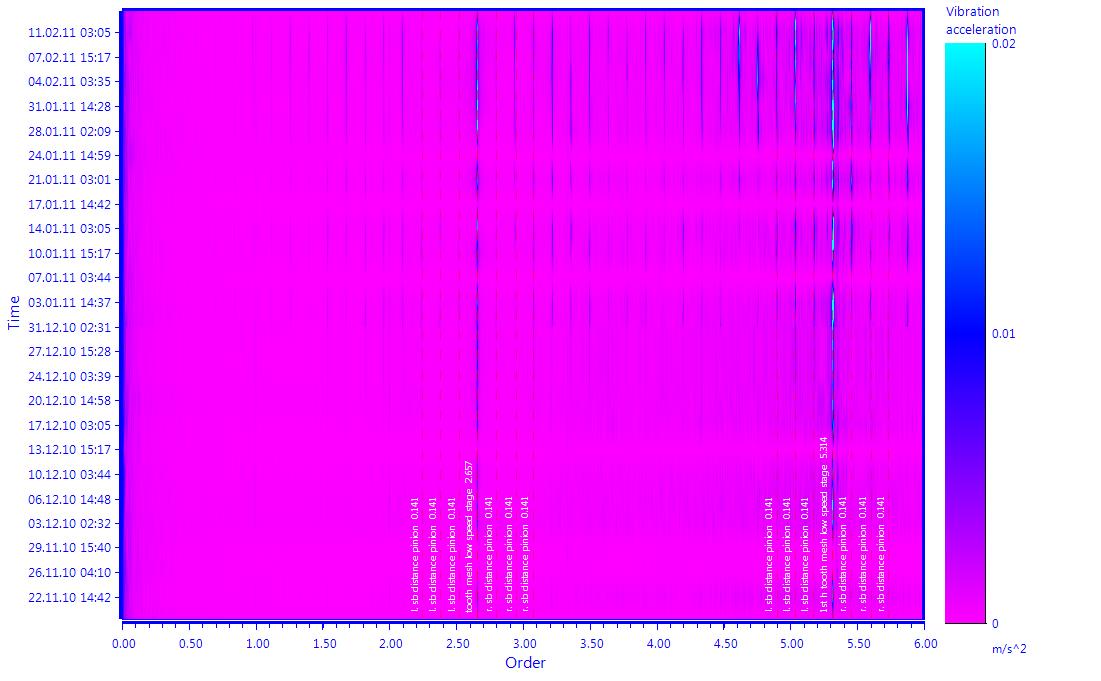 The spectrogram in the picture shows that the amplitudes of certain frequencies of the oscillation
increase with time. Before that, by simply calculation was checked that these frequencies
are damage frequencies. From the concrete progressive amplitude course a critical damage
course has to be concluded, which sooner or later requires the replacement of the damaged
parts. At this stage of the damage, however, there is still enough time to prepare the repair, to
organize spare parts, hoists and repair personnel and to plan a temporary standstill.


The damage that was visible after the gearbox was opened finally confirms the result of the
vibration diagnosis. Although the extent of the damage was not yet a reason for shutdown, it
was a significant pre-damage that would have resulted in a total breakdown of the gearbox.
Thanks to the timely detection of the damage, it was possible to produce at full capacity until
the repair date.
Condition monitoring therefore leads to an immense increase in availability, from which the
plant operator benefits directly. The cost of such a system, however, is very low.

The Peakanalyzer, GfM's online condition monitoring system, monitors the vibrations on any
number of sensors fully automatically and without human action. The vibrations are measured
and analyzed every few minutes. An alarm is only given when there is concrete evidence of
possible damage. Only then a human is asked to make a competent maintenance decision.
As a rule, the drivetrain will then continue to be operated, but the condition will be monitored
more precisely and repair activities can be prepared without hurry.